This page will serve as the home of the documentation for the bug set creator for OpenHatch's project in Google Summer of Code 2014.

Elana Hashman, this year's Google Summer of Code student, is building a "bug set creator" for newcomer-oriented events and activities including but not limited to OpenHatch's Open Source Comes to Campus. This will become a new section of the site, distinct from http://openhatch.org/search/, that allows a user to assemble, save, and edit a hot list of bugs of interest. The idea is to help the user to prep lists of tasks for attendees of in-person open source contribution events.

QUESTION: Should the list of bug sets you are presented with be global or per-user? Leaning towards global, possibly with filtering.

QUESTION: Should deletion just be a flag that makes the list not show up on the website as opposed to an actual deletion? Methinks yes. 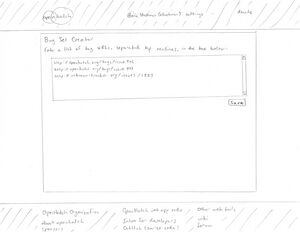 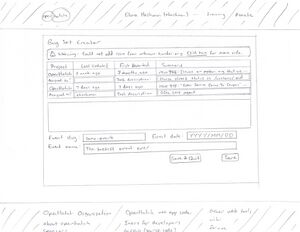 Each bug will be displayed in the preview table with the following columns:

The assigned attendee and task description can be set in the List view screen.

QUESTION: The columns above are only a subset of the data we have available. Are there any other fields you think are missing from the preview?

QUESTION: This relies on a user finding the bug URLs on their own, probably using the advanced search features of a project tracker. How valuable would an advanced search UI on the OpenHatch bug database be to help create the set?

POSSIBLE NEXT ITERATION: If bugs are available in the OH database, we'll use their info to help fill in fields. If not, we might want to try launching a crawl of these new bug URLs. 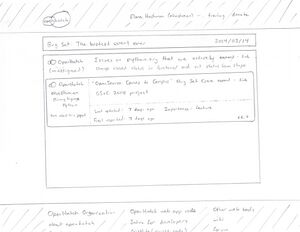 POSSIBLE NEXT ITERATION: This interface is likely going to be accessed/modified by a number of people at once. I've currently addressed this issue by having a per-bug save button. What do you think about modifying the page to allow real-time collaboration, ala MoPad or Google Docs, et al.? No clicking "Save" or page refreshes required.

I want to be able to add bugs from projects OpenHatch doesn't track. For instance, WelcomeBot's issues are not tracked. This could be in the form of freehand entry bugs.

I want the following fields added to the List View screen:

I want it to be easy to sort through the list of bugs. For example, I'd like to be able to use a filter to show only "bugs in Python" AND "bugs tagged Science".

I want to be able to use a bug on different event lists, and not have to edit it for each list if I want to make changes.

It would be nice to have a bookmarklet-type button I could install in my web browser that would add the URL I'm currently on to my bug list. Then I could browse for bugs in the original project's bug tracker and add them very easily to my target list. I think bookmarklets are very easy to write, provided that you have an API (preferably a RESTful API). Many applications (like Django) have plugins to make exposing a RESTful API really easy.

If the application is importing bug information directly from the trackers, it will need to be updated frequently.

I want to be able to mark bugs waiting on review in the set.

I want a way for attendees to claim tickets and resolve them in the application.

I want to be able to tag bugs and filter them by tags.

It would be really cool if I could click a button along the lines of "unblock this subnet", that would allow users from a particular IP block to edit bugs without being logged in.

I might add bugs to a set, have no one show up to my sprint, and then want to use the same bug set later. But perhaps someone has closed some of those bugs in the meantime! I would like to have a 'refresh metadata' button that will let me know if the OpenHatch bug tracker has recorded any of my set's bugs as "looks closed".