Welcome to the Saturday afternoon projects section of the Philadelphia Python Workshop!

In Python, indentation matters. Everything is indented by a multiple of some number of spaces, often 4.

In if statements, you indent everything you want to be run if the if conditional is True. For example:

Because James is not older than Alice, the if conditional is False, so Python does not execute the code indented under the if line.

In for loops, you indent everything you want to be run each loop For example:

The print line is indented 4 spaces under the for. That's how Python knows to execute the print line for every name in names.

if statements inside for loops[edit]

for loops inside for loops[edit]

In the above example, random and time are both Python modules. Modules are Python files outside of the current Python file that contain Python code, like functions and variables. You can use code from modules by first importing the module. Here's an example from the random module:

in is a keyword checking for containment. You can use it in a couple of ways:

Let's break down why this works:

First, remember that we can get individual elements from lists:

We can also slice lists:

We can also make a copy of the list by taking a slice from the beginning to the end of the list:

There's an extended slicing syntax that let's you say what direction you want to slice in. By default it is forward, but you can supply a -1 to say backwards:

Here are the Wordplay Project Instructions. 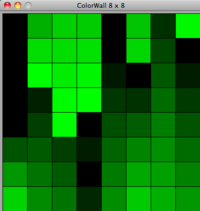